Places to buy a house in France: Aniane, South France

The village of Aniane, is in my opinion, a great place to buy a house in France. This South France village is very beautiful and is served by excellent transport connections. The village is easy to reach via Montpellier airport or the TGV train station and it also serves as an excellent base for exploring the local region.

From a property investment perspective, properties in Aniane can enjoy very good annual rental yields from summer holiday rentals, as well as long winter lets. Furthermore, with property prices in nearby Montpellier predicted to spike significantly over the next 3-5 years, the ripple-effect across the Montpellier commuter-belt will also benefit houses in Aniane. Buying a house in Aniane, France, could well turn out to be your best-loved investment.

Aniane - places to buy a house in France

Aniane is a village of around 3,000 people, located 35 km West of Montpellier. There are many reasons why you should consider buying a property in the South France village of Aniane.

The primary reason is that the village is very beautiful. It is everything that you could imagine from a village in the South of France. From the old stone buildings, to the wide esplanade lined by tall Plane trees, to the typical French bars and restaurants. Imagine walking down to the centre of the village to buy your baguette in the morning, or sipping a cool glass of wine in the evening sunshine and watching the old guys play Boules in the village square. Aniane really is the perfect place to relax and enjoy your local surroundings.

The village has also benefited from a new by-pass opened in 2020, which has dramatically cut down the amount of traffic passing through the centre of the village (en route to the popular tourist destinations of St Guilhelm-les-Desert and the Pont du Diable).

The second reason for considering Aniane is that the surrounding countryside is spectacular.

The flat plains surrounding Aniane are planted with vineyards and produce some excellent wines. The famous French actor, Gérard Depardieu, is the owner of a vineyard close to Aniane. The neighbouring wine domain of Mas de Daumas Gassac has brought international recognition to the wines of Aniane.

But just 5 kms away from Aniane, the vineyards give way to the dramatic landscape of the Massif Central. The mountains rise up before your eyes and provide an impressive backdrop to the surrounding countryside.

The local roads around Aniane are quiet and the perfect terrain for cycling. The Tour de France regularly passes close-by to Aniane on the route down to the Pyrenees.

Aniane is also located close to the famous village of Saint-Guilhem-les-Desert, one of the most beautiful villages in France and a UNESCO World Heritage site. The village is situated on the pilgrim route to Santiago de Compostella in Spain and and is listed as one of the Grand Sites de France, in recognition of its historical importance. The old square at the top of the village, with its 200 year old tree, is the perfect spot to enjoy a meal during the hot summer evenings.

The Gorge d'Herault is just 5 minutes up the road, which is a popular site for canoeing and swimming in the cool fresh waters.

The small lake at the Pont du Diable is just 2 minutes from the village. This is a busy tourist spot in the summer with the stoney beach packed with locals and tourists alike.

Next to the Pont du Diable, there is the Grotte de Clamouse, one of the most beautiful caves in France. The cave network extends for over 4.5km under the limestone hills of the Massif Central.

It is of no surprise that Aniane is a popular tourist destination (especially with French, Dutch and Belgian visitors). From a property investment perspective, this works in your favour, by providing a regular supply of potential rental customers (if you are looking to buy a second home) and keeping the local property prices buoyant.

Thirdly, Aniane is a well-equipped village, with friendly local inhabitants. There is an excellent local wine cooperative, as well as a good range of shops and medical services. 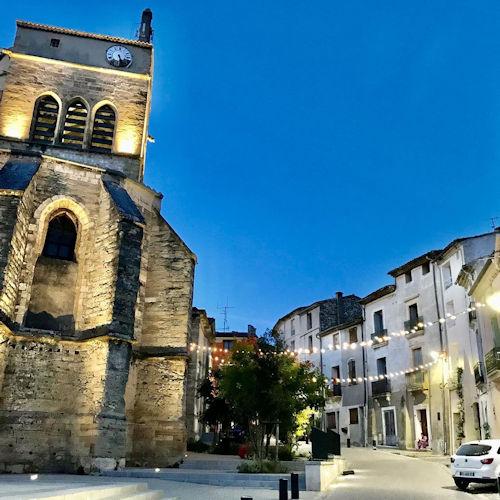 Just down the road in the nearby town of Gignac, you will find 2 good sized supermarkets, as well as a wider selection of restaurants, including the Michelin starred Restaurant de Lauzan.

Finally, the village of Aniane is located 20-25 mins from the cosmopolitan Southern French city of Montpellier, where you have access to an international airport, TGV train station, as well as some excellent beaches.

From an investment perspective, this is very important. Montpellier is a thriving city. In 2021, Montpellier overtook Strasbourg as the 7th largest city in France. Montpellier has doubled in size since 1960. The city is home to 3 Universities, including one of the oldest Medical faculties in Europe. It is also an important regional medical centre and has a dynamic bio-technology sector. Montpellier is routinely voted as the Top place in France that French citizens would like to relocate to.

But space is at a premium in the city. The local council have invested heavily in relocating the route of the A9 motorway around the city, pushing it further towards the coast, in order to free up some much needed land for house-building and technology parks.

Montpellier acts as the incubator of house price growth in the region. Montpellier is the fastest growing city in France and it has just over-taken Strasbourg as the 7th biggest city in France.

When house prices increase in Montpellier, there is a ripple effect out to the surrounding towns in the commuter belt, of which Aniane is a part.

If you would like to discuss property investment in Aniane, South of France, please call Jane Laverock on +33 6 95 50 19 21 or email her at Jane Laverock.